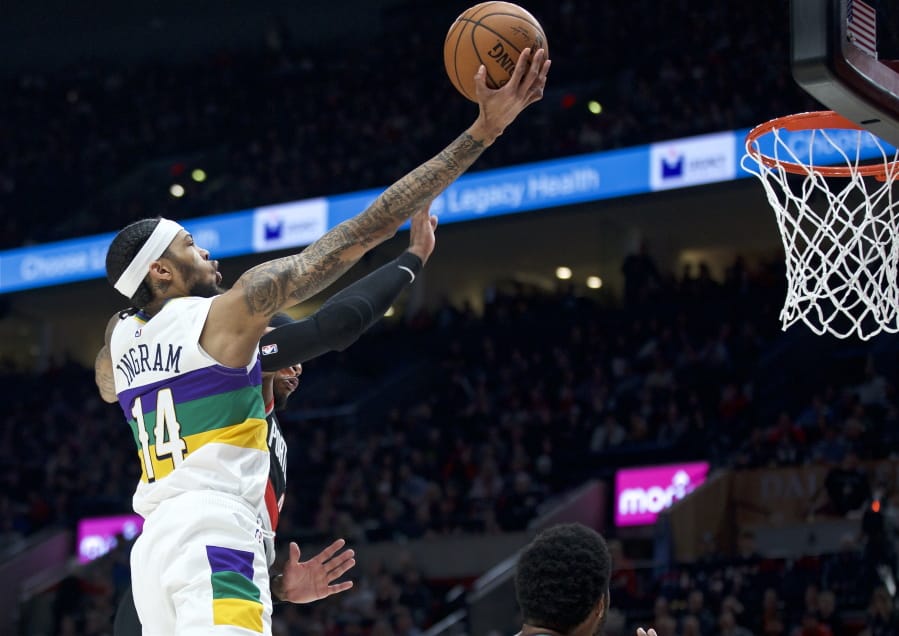 PORTLAND — Zion Williamson hears the accolades but insists he’s still getting comfortable in his new job.

He had 25 points for his seventh straight game with at least 20, and the New Orleans Pelicans beat the short-handed Portland Trail Blazers 128-115 on Friday night.

“Even though I’m a rookie and people think I’m doing good there’s still so much I have to learn,” he said. “There’s so much about the game I’m still learning, I feel like by year four, five I’m gonna have all that down.”

The No. 1 draft pick was playing in just his 11th game after a right knee injury sidelined him for the first half of the season. The Pelicans, who led by as many as 22 points, have won four of their last five games.

Even his teammates are impressed.

“He definitely takes us to another level,” Jrue Holiday said. “He’s so hard to guard and hard to stop, so for him to be doing that 10 or 11 games in is impressive.”

The Blazers, who have lost three straight, were without Damian Lillard, who is expected to miss three or more games because of a groin injury that occurred in Memphis last week. It kept Lillard out of the All-Star Game and the 3-point contest last weekend.

Lillard is averaging a career-high 29.5 points and 7.8 assists. His absence hurts the Blazers, who went into the game 3.5 games back of Memphis for eighth in the Western Conference standings.

And it’s not just Lillard: Portland had only nine players available for the game.

CJ McCollum took over as point guard and finished with 27 points and 10 assists. Hassan Whiteside added 19 points and 12 rebounds.

The Pelicans were among four teams, along with the Blazers, fighting for those last playoff berths with just a third of the season left. Coach Alvin Gentry said he’s treating the last 27 games like a college season.

“We want to play to get into a tournament. We want a high seed. Those are the things that we’ve talked about. Obviously, we have to play good basketball,” Gentry said.

The Pelicans also won the previous three meetings this season with Portland. Earlier this month in New Orleans, Williamson had 31 points and nine rebounds in a 138-117 victory over the Blazers.

Williamson, who played just one season at Duke before going pro, went into the game against the Blazers averaging 22.1 points and 7.5 rebounds.

His streak of games with 20-plus points is the longest among NBA rookies this season. And he was the first player since Michael Jordan to have 20 or more in eight of his first 10 NBA games.

At just 19, he’s the youngest player in league history with 20-plus points in seven straight games.

“He just fits in,” Gentry said about his emerging star. “It’s not like we call a bunch of plays for him. Our guys do a good job in the flow of our offense trying to find him.”

Lonzo Ball’s 3-pointer put the Pelicans up 29-17 in the opening quarter. But the Blazers closed within 40-38 early in the second on Whiteside’s dunk. It was as close as Portland could get, and Williamson’s dunk gave New Orleans a 54-46 lead.

Williamson’s layup pushed the Pelicans’ advantage to 65-50 and New Orleans led 73-63 going into halftime. He led all players with 19 points.

Consecutive jumpers from Carmelo Anthony and Whiteside’s dunk pulled Portland within 80-75 in the third quarter. The Pelicans pulled away with a 12-0 run to head to the fourth with 102-83 lead.

Portland closed the gap a bit in the fourth when back-to-back 3-pointers from Trevor Ariza and McCollum got the Blazers within 114-105. Holiday’s 3 and Ball’s layup extended New Orleans’ lead again and fans at the Moda Center headed for the exits.

Pelicans: The Pelicans were coming off a 123-118 loss at home to Oklahoma City before the All-Star break. Williamson had 32 points. … New Orleans missed 12 free throws in the first half. … The Pelicans have won three straight on the road. … Josh Hart finished with 13 points and 13 rebounds off the bench.

Trail Blazers: The Blazers swept the Pelicans in three games last season. With Lillard sidelined, Gary Trent Jr. got his third start for the Blazers. His dad, who played for the Blazers from 1995-98, was on hand to watch.

For much of the night, Williamson faced veteran Carmelo Anthony, whose task it was to try to stop the teenager.

“I don’t know if I would say that was fun, but he’s Carmelo,” Williamson said about going up against Anthony. “His resume speaks for itself. He’s a crafty player. It’s always tough to match up against players like that, but I love the challenge.”